Unlike most gluten free breads, this bread is both gluten free and low carb. The popular gluten free breads, like Udi and Rudi, have about as many carbs per slice as regular wheat bread.  And they’re full of stuff that isn’t great for you like potato starch, rice starch, evaporated cane juice, tapioca malodextrin, tapioca syrup, cultured corn syrup solids??, etc.

I don’t want to deceive you guys so I’m telling you right up front – I love crusty, yeasty, bread made with wheat flour, and this bread is nowhere near as good as that.  But, if you’re tired of spreading your peanut butter on a cucumber and you crave a grilled cheese sandwich or something to actually put that cream cheese and smoked salmon on, this bread is definitely for you. I don’t like it raw, but sliced thin and toasted it tastes pretty darn good.

I urge you not to do what I did when I first encountered this recipe: I tuned it out. I thought, “Really? Now I actually need to bake my own bread in addition to all the other low carb changes? I don’t have time for that. I’m not one of those bread-baking types.” And then I read the ingredients, and the psyllium powder just put me over the top. It was just too foreign to me. I mean what the hell is that? And where do you get it?

Here’s the thing – this bread takes literally 7 minutes to put together and psyllium powder is an Amazon click or trip to the health food store away. Since you slice the bread thin, a loaf lasts a long time. It’s totally worth it. I now make it twice a week and think nothing of it.

I got this recipe from my friend Earlynn who found it on Maria Emmerich’s site. I’ve made one change, which is to reduce the amount of baking powder. I found that more baking powder gave the bread a big fluffy top, which collapsed as soon as it came out of the oven and created a bread that was full of holes and hard to slice.

For success you need to follow the recipe exactly. Absolutely no substitutions. This is one of those science experiment type recipes where the slightest deviation can lead to a mess. You’ll also need a kitchen scale and either a hand mixer or a standing mixer (don’t get discouraged, those things are also easy to come by). 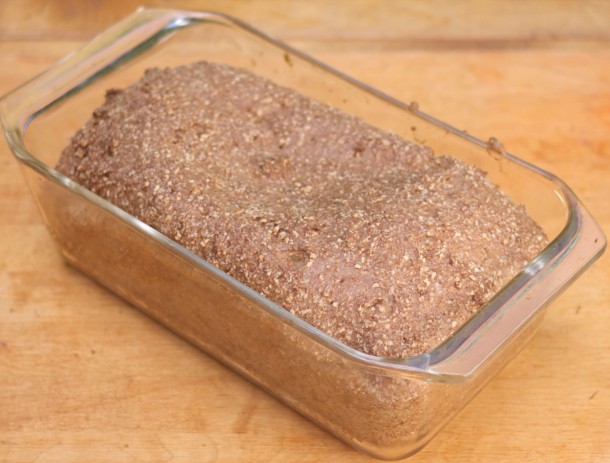 Eating healthy has changed my body, my energy level, my overall health, and my quality of life. Since I love great tasting food, I've worked hard at making healthy and delicious go together. Preheat To 350° is for people interested in eating well in every sense of the word...

Eating healthy has changed my body, my energy level, my overall health, and my quality of life. Since I love great tasting food, I've worked hard at making healthy and delicious go together. Preheat To 350° is for people interested in eating well in every sense of the word. Read more →